Video analytics has a variety of applications in CCTV systems, helping raise security to higher levels. A thick layer of information — sound — is often overlooked, or is only used passively, as an addition to the video stream. What a glaring omission! With the cutting edge technologies, audio analysis has been made a) available, b) affordable, and c) accurate. Moreover, you can keep the analytics onboard, so there is no need for extra resources on the server side.

We are proud to announce that Active Shooter Detection is now available within our video surveillance ecosystem. The functionality is delivered via Gunshot Detector by Louroe Electronics , and we have integrated it with both Ganz CORTROL Premier and Ganz CORTROL Global solutions. Not only gunshots but also other wicked acoustic activity — raised voices, broken glass — can be efficiently detected, serving as a trigger point to unfold the emergency procedures.

Almost any CCTV system benefits from additional modules that fit its purpose, and active audio monitoring is one of those. It can provide crucial supplementary evidence and verification, especially in critical locations. Be it law enforcement facilities, schools, airports, commercial spaces or office buildings, they all need enhanced security. Quite often, it is audio that can add the missing piece of the puzzle if the video stream does not provide enough information, or if camera tampering has occurred. As a result, the total security level of the property, employees, and visitors is increased dramatically.

On one side, the integration uses Digifact A , an IP microphone by Louroe Electronics with audio analytics capabilities. It captures audio at a wide dynamic range and then streams it over different protocols, including HTTP and RTSP. The microphone's input threshold allows creating alarms based on specific dB levels. With audio analytics on top of that, Digifact can automatically detect aggression, shooting, car alarms, and the sounds of glass breaking . It recognizes most firearms, including handguns, shotguns, rifles and automatic rifles.

EVO, in its turn, acts as a recipient for those audio and event streams. As a smart video management system, it also provides a wide choice of security-related action scenarios. These range from instant notifications to various pop-ups and triggers for both internal and third-party modules. Digifact integration also ensures live and  recording of the audio stream for later playback in the EVO Monitor application. EVO servers record incoming audio by combining it with video from other cameras. 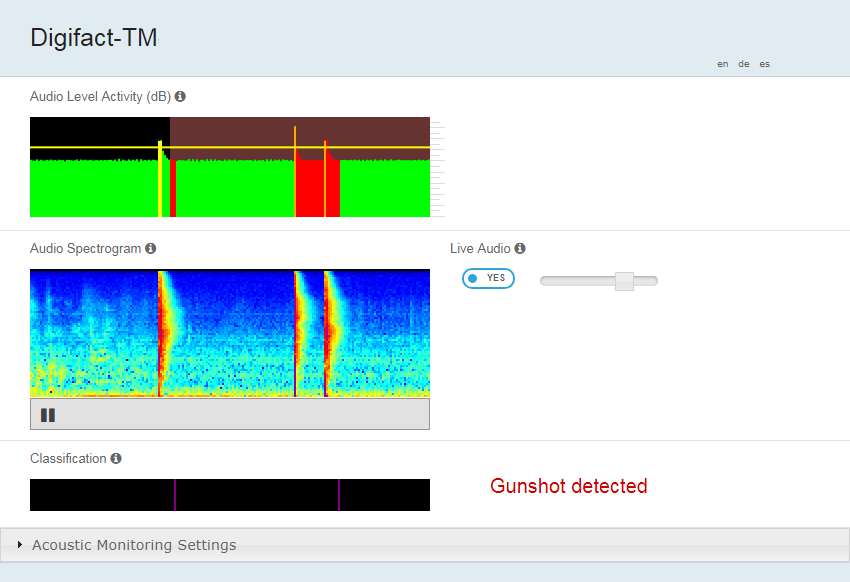 Digifact A detects and classifies sounds, then notifies EVO