Over the last few years, the interest in smart security systems has grown dramatically. Video management systems alone are not enough. Considering the present-day circumstances, they are merely not covering all of the customer’s demands and needs. That is why here, in CBC, we focus on making the software compatible with many third-party systems, so that we can team up with other systems. Thus, the video management system fulfills its portion of workload, at the same time being able to communicate with external systems for immediate response/reaction.

One of these integrations provides a gateway to access control systems, and we shall take a closer look at it in this article.

Customers want to be able to control the whole system from one place, but the systems are growing in size and complexity. Due to both increasing technology availability and security requirements, there is a need for a user-friendly and straightforward architecture. The components of such a system should remain sophisticated, but the complex layers are to be transparent for the end user, leaving all the hard work to the automation. No universal feature-rich system would satisfy everyone; instead, people piece together different software to gain maximum profit, and this composition varies from system to system, depending on the customer specifications.

Co-operation on the software level not only provides a unified interface, making it more convenient for the end user to manipulate the system but also allows proactive scenarios to be set up to operate system-wide. Events generated by one component trigger a response in another part. This response happens automatically, without human control, but with human confirmation or supervision, if required. This automated response saves a lot of time and minimizes the effect of human error and potentially adverse effect from social engineering, thus mitigating security risks. You cannot collaborate with the camera, making it possible to sneak into a classified installation, as you could do with a human guardsman.

In light of the facts mentioned above, it seems evident that making a video management software work together with access control system provides benefit for the customer. So what does Ganz CORTROL offer in this regard?

At the configuration stage, it is the reader list that you receive: CORTROL servers obtain the reader information from the access control systems and bind it to doors in the CORTROL configuration. Specific messages from the readers may depend on the integration so the available information may vary from system to system. Further, these data can be used to generate events in the  Event & Action Configurator and bind them to different actions. For instance, such a setup fits the scenario when you need to receive notifications of unauthorized persons trying to access a specific location. Using actions, you can also send triggers back to the access control software, changing the door status.

If you have used CORTROL on bigger installations, no doubt, you know CORTROL has interactive maps  —  either based on an image or the world map. Door status changes are reflected on maps in CORTROL Monitor, too, if configured. For this, door markers are put onto maps, immediately allowing you to see the door status and also to change it. Also, miscellaneous system events – DI triggers, user buttons pressed, a face from the whitelist recognized  —  can be used to change the door status. Using automation instead of human control minimizes interaction time, thus helping build a highly efficient system for routine operation.

CORTROL Monitor application offers advanced investigation based on reader events and cardholder data. The cardholders’ details are entered in the access control system itself, but the search can be performed on the CORTROL side, allowing you to see the events along with the associated video footage. Thus, there is no need to switch to the access control interface if you wish to review the event history.

Now, how do you set up CORTROL to be smart enough to do this for you?

Set Up, Configure and Use

To cut a long story short, let us consider you have got both Ganz CORTROL and your access control system up and running. To establish the connection between the two, follow these steps:

While the first three stages are typically done by the system administrator or the CCTV engineer, the latter one is for the security people, desk clerks, visitor control officers, and others having limited access to the video management system resources (and not the configuration  UI ).

In your CORTROL Console application, switch to the  Access Control under the Configuration section (scroll to the very bottom to find it). Here, you can create a new entry. Note that, depending on the third-party access control engine, the required parameters may vary; for example, for Keri Doors .NET connection, you will be requested to enter the port number. For the Keep server (by Feenics) connection, you only need to enter the instance number, as the connection URL is hard-coded.

Now you can create a  new door from the same section by using the drop-down list in the upper panel. If everything is fine and the connection between the modules has been established, you will have a list of readers to pick from. When filling in the details, you will have an opportunity to select a channel: video from this channel will be then associated with the target door, allowing you to view it in the investigation mode in CORTROL Monitor.

Once you have added the door configuration, you can check their current state in the Monitoring section of CORTROL Console, under  Access Control. Door open state, lock state and other details, if any, are displayed here.

If the connection is still being established as you check the status here, use F5 on your keyboard or the Refresh button on the upper panel to reload the door list.

PUT DOORS ON THE MAPS

Why use maps? You can create interactive layouts and put all cameras and doors onto them by using the floor drawings. Floors can be then interlinked, producing a layered building plan.

You will find the Maps category in CORTROL Console, in the Configuration section. From here, you can add both geo- and image-based maps. 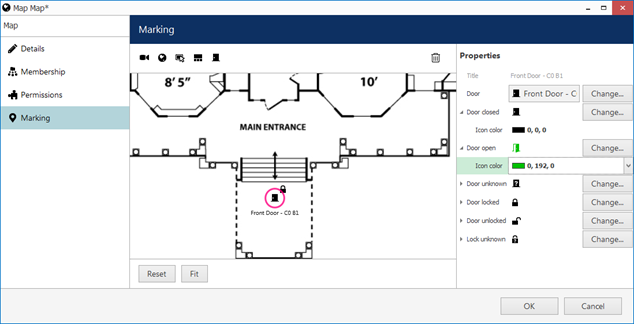 Create a map and put door markers onto it

Place as many door markers as you need by dragging and dropping them from the panel above the map preview. For each one, you can select how different door states look like: controls on the right enable you to change both the icon and its color. When you use this map later in the CORTROL Monitor application, the markers will reflect the door status with your defined style. Thus, door status monitoring is possible from the client application without granting user permissions for CORTROL Console access. 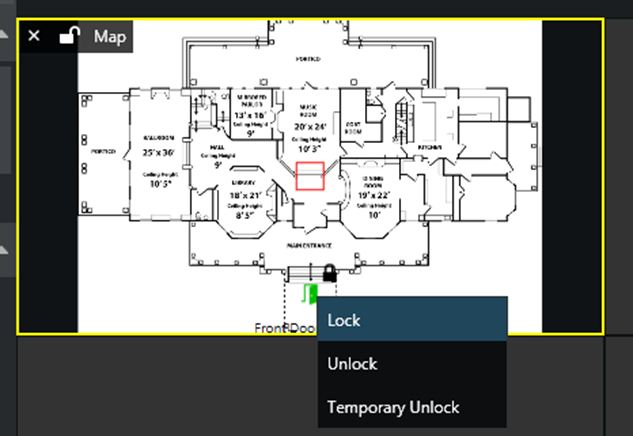 Click any door marker on the map to bring up a drop-down menu. The list will include available door actions: lock, unlock, and temporarily unlock the door. This kind of activity will be reflected not only in the  Access Control section of CORTROL Monitor but also, as you might expect, in the third party access control module as well.

Whether you have a multi-building project or just a single door installation, access control integration enables you to control the entire facility from the same place. And, thanks to the CORTROL Event & Action Configurator feature, a substantial part of these control routines can be automated.

Here are just  a few scenarios  (from the whole variety of possible combinations!) offered by CORTROL E&A:

Unauthorized access may be a situation when someone without any access permissions tries to open a door. Also, this may be a result of someone trying to enter a facility with restricted access, where “restricted” applies to specific hours or shifts. As all door events are logged, you can later investigate the facility access history to verify that only authorized personnel have entered it and to make sure no one is using other people’s access tokens.

CORTROL  Event & Action Configurator is available with both CORTROL Premier and CORTROL Global license editions. To set up events and the actions they trigger, you are welcome to use the  Events & Actions section of CORTROL Console. There are separate configuration subsections for events and actions. Once these are created, go into the Rules category and create scenarios you want.

Combine events and actions into rules

For any existing rule, you can add rule modifiers: schedules, conditions, and delay times.

When CORTROL Monitor is connected to at least one CORTROL server with an access control configuration, an additional tab appears on the top panel. Access control investigation has the following modes:

You can filter the events based on the time interval, door name, specific cardholder name, as well as the target event name. For example, you can:

After clicking any event on the list, you can play back the video footage associated with it. (As described earlier in this article, a channel can be bound to a door at the door creation step in CORTROL Console.) Playback appears on the right-hand side, in the form of the instant playback, with all controls usual to the instant playback mode. 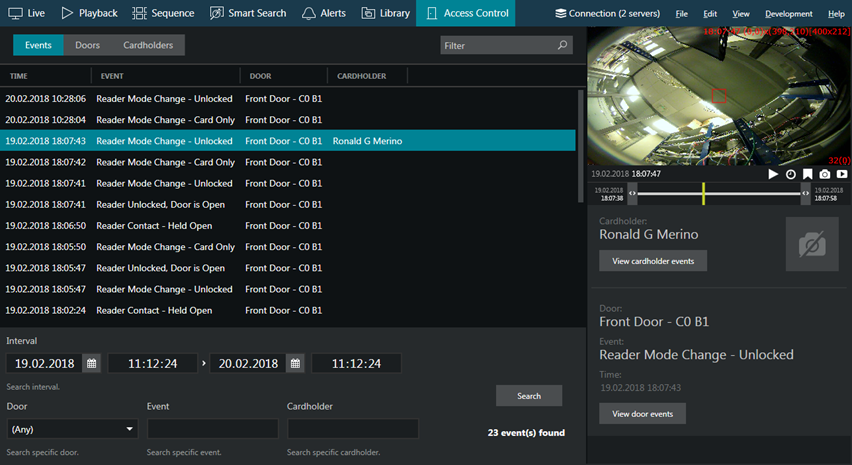 In the Doors mode, click any door in the list to see its live status. You will also have an opportunity to lock/unlock the door from here. In the Cardholders mode, as you might have already guessed, you will see the list of all cardholders present in the access control module database. If the person entering the cardholders’ list in the access control software cared to add their photos, you would have an opportunity to see the pictures in CORTROL, too. Thus, it is easy to see if there is a match between the footage and the card used to unlock doors.

Made For Efficient Operations

Do you still hesitate if the integrated solution is the right thing for you? Let’s sum up what we have here.

Access control software configuration takes the same time as usual, plus an extra fifteen minutes to teach CORTROL to communicate with the third-party engine and receive the door information. In exchange, your security officers get a single user-friendly interface. No more switching from window to window; no need for extra displays for every software client. (Better use the redundant displays for camera live view, right?)

For typical, routine access control related actions, there is no need to switch to a different user interface; everything can be done from the CORTROL Monitor application. While every action may take just a second or two, considering the number of such actions during the day, the total amount of optimized time is considerable. And even the most complex scenarios are fully automated, which means you only set them up once and then enjoy the effect, at the same time sheering away from the human-caused error.

From the point of view of the access control software, there is no difference if the doors (readers) are controlled from the native interface or from the integrated software. Of course, the integration does not cover everything there possibly is, but incorporating a whole access control engine into VMS would be too much. Instead, the most popular functionality has been brought to you and made available via CORTROL interface.