Let’s consider your extensive CCTV system with a control center and a lot of screens in there. And you strive for a natural and ingenious management tool: for, without it, controlling the video wall may turn into a nightmare. CORTROL Global software suite offers an easy-to-use video wall solution, which takes minutes to set up and seconds to learn to drive it.

In this article, we focus on the Ganz CORTROL Global video wall capabilities and see how it can be applied in any control center, operators’ room, or dispatcher office.

Video walls in CORTROL Global can be thought of as virtual entities. Apart from matching the video wall layout to the actual display arrangement, a single video wall can unite physical displays from different workstations across the world. This enables you to manipulate the contents of many no-matter-how-remote displays from a comfy lounge chair in your garden in no time at all. Monitors connected to the same computer may belong to different video walls, if required, for example, for sharing video wall administration permissions between different people.

Contents of the video walls can be:

To assign the contents of the video walls, you just need to be connected to the same CORTROL Global server  —  no matter where you are. You do not need any physical control over the video wall machines. Nor do you need to be a part of the same video wall: from your workplace, you are in control of all video walls in the CORTROL Global system. (Naturally, you would need corresponding permissions). We do not imply any license limitations on the number of your video walls in the software – create as many as you need for no extra fee!

CORTROL operates through Windows API and uses it to its advantage: the software works with the system display arrangement, allowing you to create new application windows with a single click. Once you have installed the CORTROL Monitor software and configured video walls, all the management is done on the software level, relieving you from the necessity to use mice and keyboards every time a change in the layout is required.

If you wish to combine several physical displays into a single one, you can set it up using a third-party driver. Simply configure it so that the array of monitors appears as a separate display in Windows Control Panel: once it does, CORTROL Monitor will also be able to work with the “big screen” as if it were a single display.

So, how do you employ CORTROL Global video walls? A few simple steps, and you are all set:

Within each workstation, you can dedicate some displays to a video wall while leaving others to be local only, or assign these displays to several different video walls. The display layout may conform to the actual (physical) display pattern. Another approach, as mentioned earlier, is to create a virtual video wall that will include displays from different locations.

Though, at this point, let us consider a case where the video wall is aligned with the physical display sequence  —  a perfect case study for a control room.

To create a video wall, open your CORTROL Console and go to the  Video walls section under Configuration. You will need an administrative account for this, or at least a permission to manage video walls enabled in your user’s  Administration profile  (which also automatically lets you log into CORTROL Console).

On the top panel, click the  + New video wall button: a dialog box will appear, allowing you to create the desired display arrangement. Each cell within the layout is a single physical screen, as it appears in the Windows Control Panel.

First, select the grid size    —  the maximum number of displays vertically and horizontally. Up to 20 per row/column and up to 100 displays in total!

Then, use the Merge and Remove buttons to fit the monitor size and remove missing or non-existent displays. Apart from the index number, each display can be optionally assigned a  name  – based on the camera type, location, or other project-specific attributes. Both display numbers and names will appear in the CORTROL Monitor application. Thus, you identify where a specific display belongs to with just one glance. 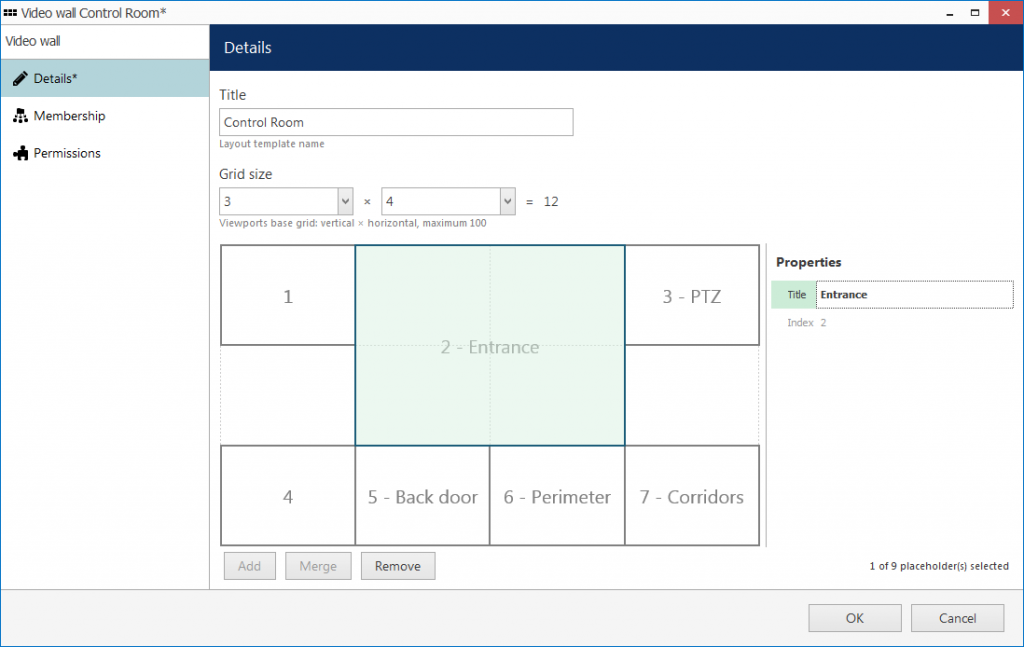 Create your desired layout with the video wall constructor

After you finish and hit  OK  to apply the configuration, it will be immediately saved into the database. All connected CORTROL Monitor applications, as well as the central server mirror, will be notified that the video wall functionality is now available. But do not close the dialog box yet; let’s see how you can restrict access to the video wall management.

Control all of them

Using the same administrative account for client access would be a security breach. So, first of all, set up user access to the video wall in the CORTROL Monitor application: choose, who will supervise the video wall and manage its contents. And then, teach your staff these several steps for the video wall management!

While still in Console with your video wall opened for editing, go to the Membership tab. Here, you can choose if the video wall will belong to a video wall group. Grouping facilitates permission handling, and we suggest that you do use groups if you are dealing with a great number of users. Further, the Permissions tab lets you grant the user access to the video wall or video wall group, for that matter.

There are two permissions: to view and to manage the video wall.

Now that the video wall layout is ready and access to it is secured, let’s see how it can be supplied with content.

Visualization is always far more interesting than pure configuration, so here comes the exciting part Open your CORTROL Monitor application and connect to the Global server. In the Live mode, click the   Multi-display  setup button in the upper right corner of the application window (right beneath the main menu) and then open advanced settings. 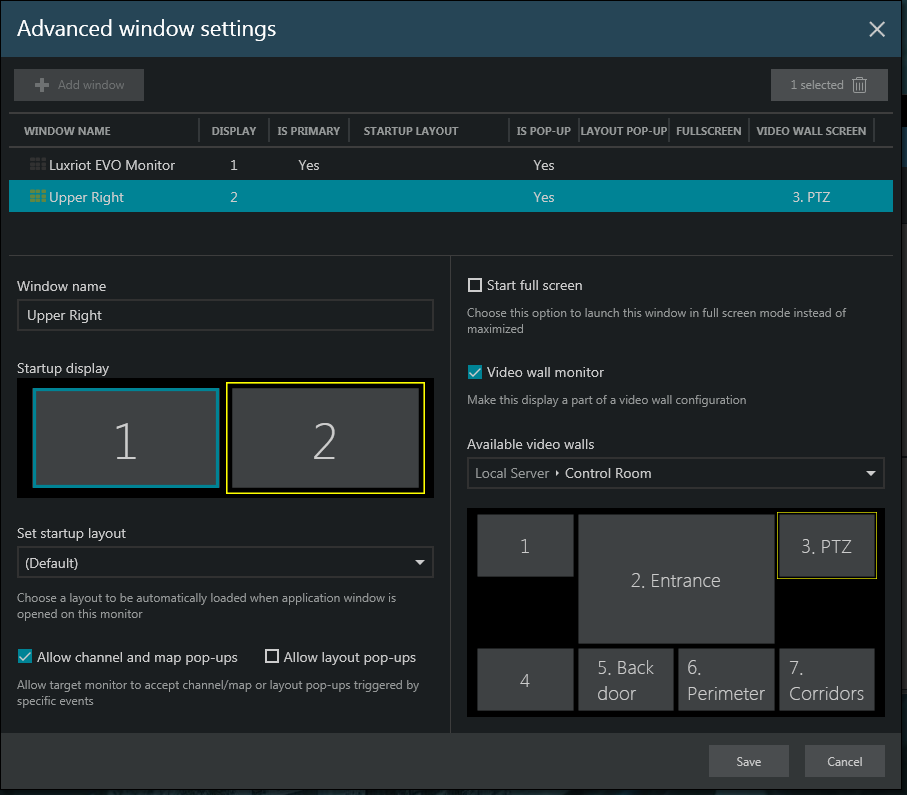 You will see the layout of local displays here: for each one, you can create a  new application window and make it a part of the video wall. This is also the place where you define startup layouts for each window: it will be loaded automatically once the CORTROL Monitor application is launched.

Now every CORTROL Monitor window “knows” it is a member of the video wall: this information appears in the application title bar.

Once the preliminary setup is finished, there are three ways how to  set the contents of the video wall  from the CORTROL Monitor interface:

You can either select empty layout templates and then populate them with channels and maps, or pre-defined layouts and then use them for video wall displays. Layouts can be either local or shared via the Global server. 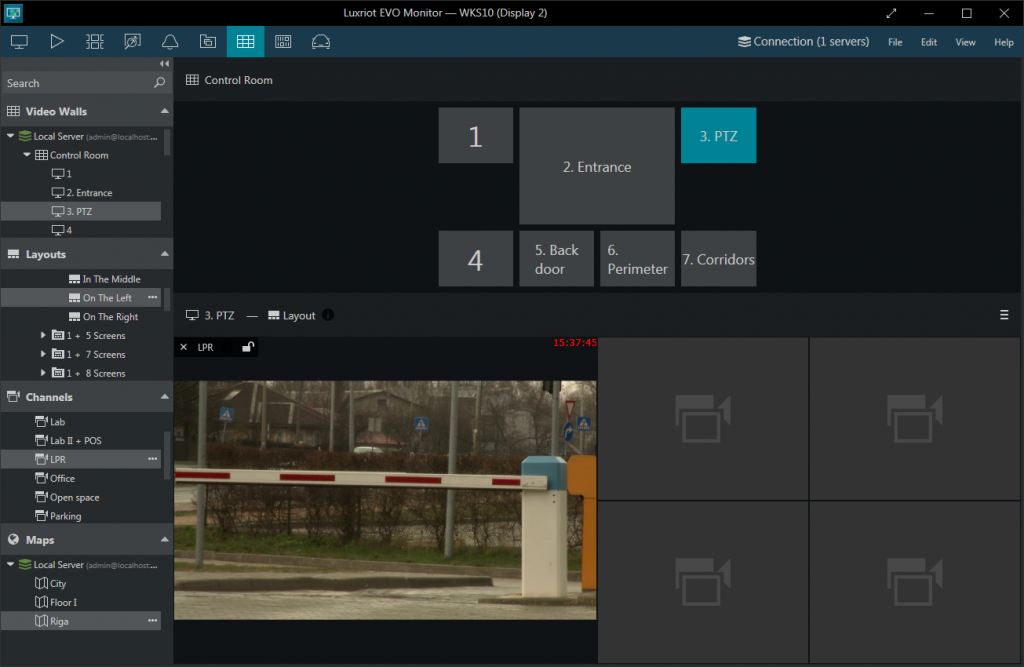 Several small but important things will facilitate the process:

Some other overlay controls, such as PTZ and digital PTZ, are also available in the live preview for your convenience.

Every change you make here is immediately reflected: there is no need to save or apply.

The setup process described above is equally suitable for any type of control room video wall. Be it a hospital, a shopping center, city surveillance, or an airport security control center; we will ensure that you have the best experience with the CORTROL Global video wall solution.

To finish with, here is a real-life video wall example from the control room. Easy to configure, convenient to use. Feel ready to try yourself?