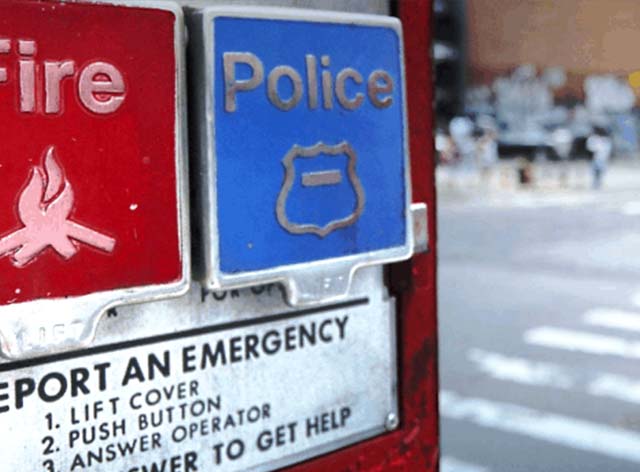 Did you ever get lost in a new city, or run into trouble in your own? Then you must have made use of an emergency call station — or considered doing so. Intercom operators would have instantly connected you to a tourist information desk or a police station for assistance. Efficient and straightforward, intercom solutions are everywhere.

But what exactly is behind the scenes? While there are many solutions on the market, it is quite clear the intercoms alone cannot serve as an all-encompassing system — and they do not need to. Integrations allow comprehensive systems and technology integrations, where every component does its dedicated job. Such architecture unites otherwise incompatible modules, allowing for greater complexity and flexibility. So, merging the intercom system with a ready network solution benefits all, especially bearing in mind that it comes at no additional cost.

In today’s article, we shall take a closer look at one of the industry leaders —  COMMEND intercom solution platform — and see how to make it work together with GANZ CORTROL.

Intercom solutions are a vital part of any modern city infrastructure, filling the gap between public and security establishments. They introduce an extra security level and can be easily added on top of almost any existing “concrete jungle” ecosystem. Panic buttons, SOS stations on the roads and in the tunnels, information points in airports, stadiums, and schools — these are just a few examples of COMMEND’s applications. Over the years, numerous customers have deployed their solution platform in different environments. Wherever reaction speed and flexibility are called for, COMMEND is there to serve people.

With incorporated intercom support, a plain network server becomes something more significant. This symbiosis is welcome by such network consumers as municipalities, law enforcement, and any other types of high-security establishments. Without much effort, they procure a carefully orchestrated ensemble — rather than just a diverse collection of servers. The desired behavior of the system is set up once and then used most efficiently and effectively.

It all starts when an intercom call comes in: the CORTROL and others are programmed in the CORTROL Event & Action (E&A) Configurator.

GANZ CORTROL can record the intercom call independently — in its own channel — with a sound wave visualization instead of a real video stream. Alternatively, the intercom audio track can overlay video from any other existing video camera, or even multiple cameras. The latter is achieved by using the intercom channel as an external audio source for the target video channels. Thus, relevant cameras — presumably, those overlooking the emergency station scene — get a proper audio track instead of distant sounds and hardly audible speech. Intercom settings in CORTROL allow defining a time shift to help achieve lip synchronization so that such footage can be used later in court. 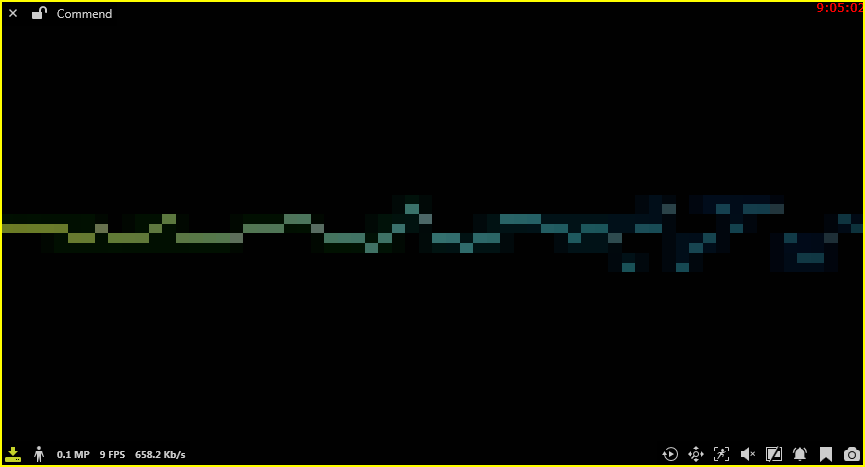 Sound visualization for the intercom channel

Association of intercom audio with video channels works for both live and playback. This means you can replay the recorded audio track at any point later, either as an independent recording or in association with the camera(s) looking at the intercom station. You can set the audio recording to constant and make intercom events trigger the recording start and end for network cameras. Also, an extra option could be to ask the operators for comments after the call is over. The supervisor can then easily search for commented bookmarks from any GANZ CORTROL Client workstation.

This point is crucial for the control center staff. The central console operators, working with both network and intercom systems, need to see who is calling on the intercom. When they answer another call, a monitor is driven by GANZ CORTROL automatically displays the camera — or multiple cameras —  overlooking the target emergency station. To prevent the operator from being distracted, the display is then cleared. An empty screen replaces any previously shown video channels when there are no ongoing intercom calls.

Such monitors are a part of the CORTROL Global video wall, and the automation is possible thanks to special video wall actions for the live video and instant playback popup. But, apart from this, other types of actions can complement your scenario.

E&A conditions help build more complicated arrangements, too. For instance, intercom events let CORTROL know which place the call was answered. Based on that, CORTROL will pop up the video on a specific video wall screen.

GANZ CORTROL E&A suite grants excellent flexibility. There is much more to it than just video popup. Other objects can pop up just as easily: this includes maps and channel layouts, the latter being a pre-defined collection of cameras. If there are multiple operators’ consoles, and calls are diverted from one place to another, you can condition E&A rules so that the video pops up exactly where the intercom was answered.

What if the cameras in question are speed domes? Before sending their streams to the video wall, you can ensure they go the required PTZ preset. One speed dome can then cover a larger area — perhaps, even with multiple intercom stations. And, while there is no active intercom call, the dome can go on a PTZ tour, which will be automatically resumed after the call is over.

When intercoms are used in critical locations, early crime detection and prevention is a must. Thanks to GANZ CORTROL's integration with Louroe Electronics, shooting detection can be now a part of any CCTV solution.

Traditionally, GANZ CORTROL empowers you to control all kinds of gate equipment. Barriers, bollards, gates, and doors, opened, and closed, locked, lifted or lowered, either automatically or with some human interaction. For instance, the operator can verify the person’s identity and grant access to someone requesting entry over the intercom.

Another tiny yet useful element of E&A is delay timers. You can add them on top of any rule to postpone the resulting action or action chain. Thus, before executing the action, there is enough time for CORTROL to check all stipulating conditions. Also, delay timers help define for how long a specific condition will be active: an important point when you need to avoid multiple triggering.

Supposing you already have a running COMMEND system with VirtuoSIS servers, and hardware and software intercom terminals, what exactly do you need to make it all work in GANZ CORTROL?

The short answer is: add VirtuoSIS servers as devices, set up intercom terminals as their channels, then set up desired events and action, sit back and enjoy. Let us scrutinize this procedure thoroughly.

Each COMMEND server is a separate device in the CORTROL configuration. Depending on the site layout, the number of channels may range from just 1 and up to 128. Channels represent intercom terminals: hardware or software, Windows-based or mobile apps on iOS and Android, any supported type. 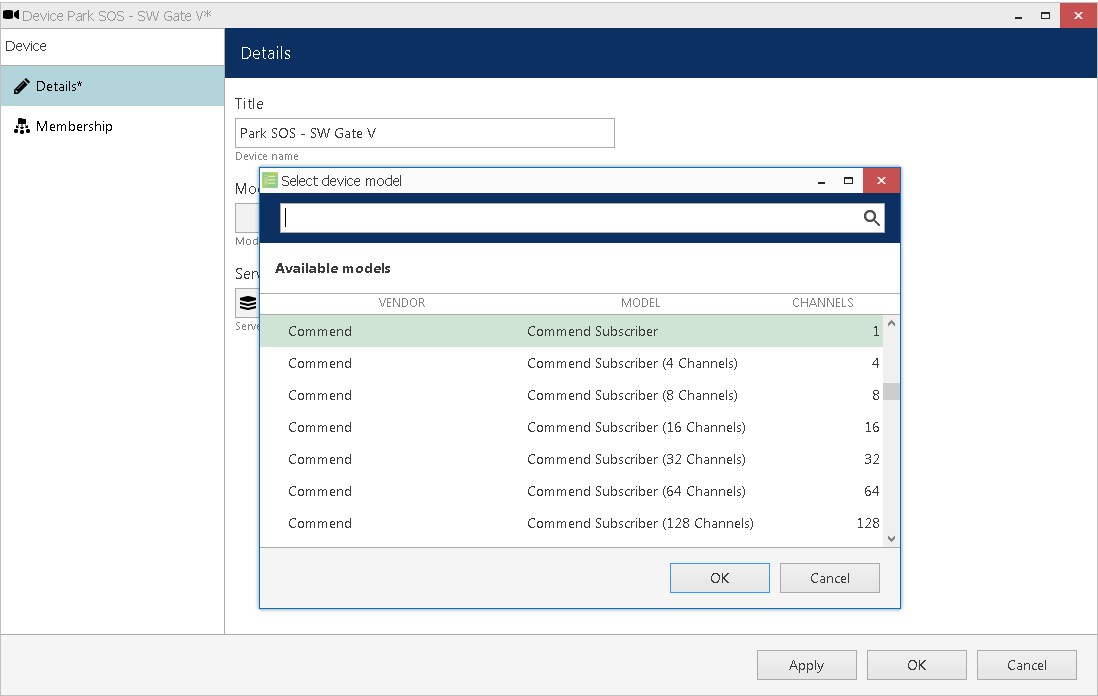 Select one of the available Commend models

Once you have added COMMEND subscribers into GANZ CORTROL configuration, adjust their channel settings. This step is particularly important as there are no default or automatic settings here. Each channel corresponds to one intercom terminal: you will need to enter its IP address, incoming call numbers, and other relevant parameters. 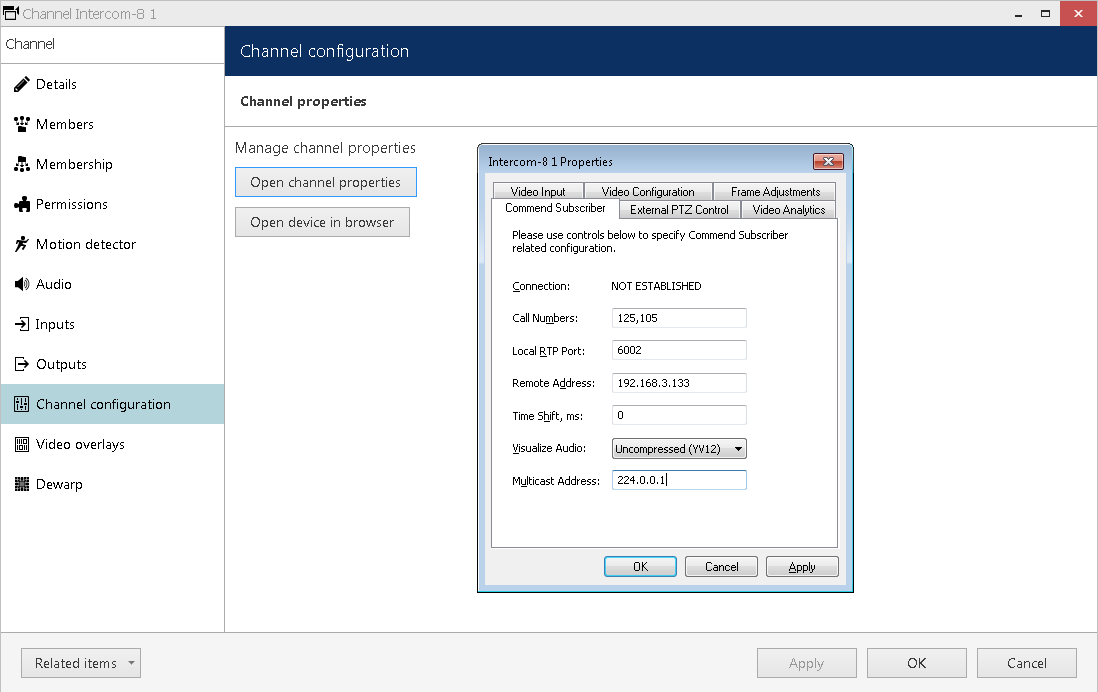 Next, turn ON continuous recording for the target channels. Generally, there are two approaches, as mentioned above:

To go for the second option, open your video channel’s properties and choose  External audio source on the Audio tab. An additional field will allow you to select the intercom channel to serve as the audio source. All you have to do is enable continuous recording for the target camera.

Once someone calls the intercom, the related channel pops up in the Commend monitor software. CORTROL Event & Action manager can use this information, too, and initiated popups, as well as any other actions of your choice.

In the E&A Configurator, there are four VCA type events from every intercom channel. Camera popup on the main/preview monitor designates the beginning of the call. Respectively, when either monitor is cleared, GANZ CORTROL regards it as the end of the call. 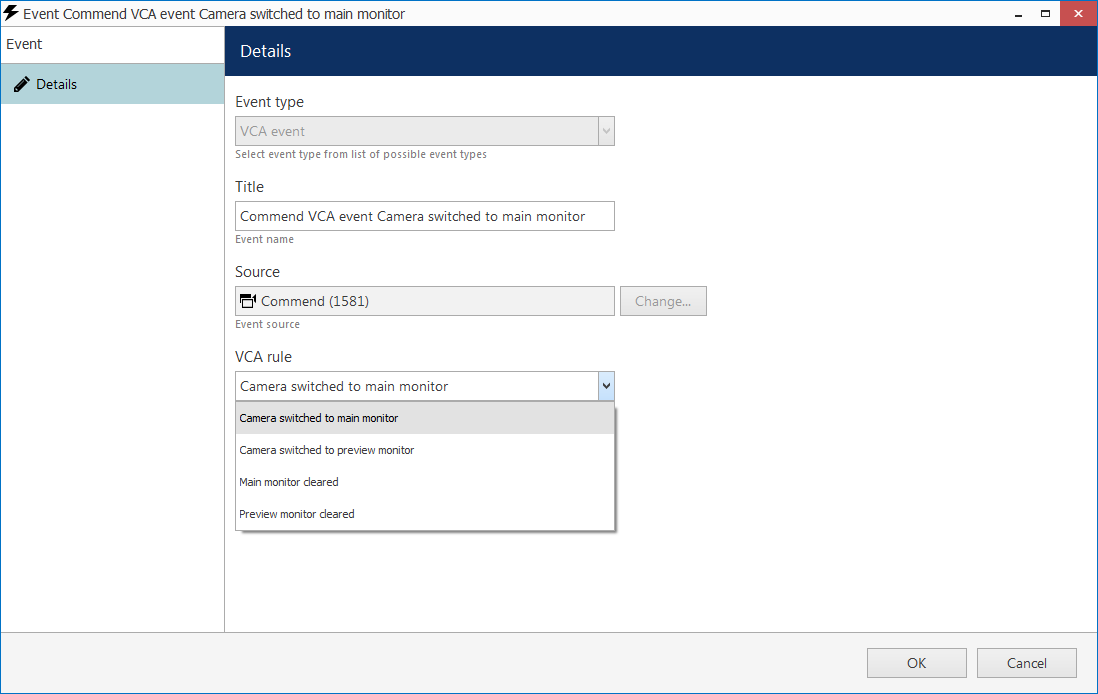 VCA events are available for every Commend channel

You can use these events in different scenarios. For example: 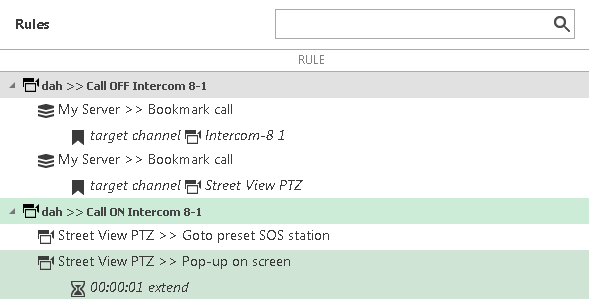 Rules for camera popup and bookmarks

AND OFF YOU GO

To verify the scenario, open your GANZ CORTROL Client application and try making an intercom call via Commend software. You can also use the  Test button in CORTROL Console’s E&A section if you do not wish to wait for an actual call to happen.

And a few more tips before you go: